“Currently on show at the Q Gallery Derby is Dave William’s Machines for Making Art. The works in this exhibition, art making machines, and wire and digital drawings, were produced by an artist from a long tradition of thinker/makers: an individual who combines creative thought with the skills and obvious enjoyment of construction. Dave William’s studio is filled with wire constructions, engine parts, Meccano pieces and working drawings, and it is clear that he would be equally at home in the design department of a firm of mechanical engineers. This bridging of art and science is the key to William’s practice, and explains why his work sits comfortably in many venues – in the gallery or out in the urban landscape, its aesthetic having a universal appeal.

The initial impetus for the two art making machines was prompted by an idea from the Gallery, but the idea is not new. As far back as the 1960s, the Swiss Kinetic artist Jean Tinguely made two art making machines that produced abstract painting, putting them in competition with each other to see which one could make the fastest mile of art! The influences on William’s work are diverse, but what is obvious are the visual references to the age of the industrial revolution, the mechanics of its cogs and cranks, its brass and leather. It was an age where the artificial divisions between art and science that Williams refutes did not exist, a time when Humphrey Davey, inventor of the Miners Safety Lamp published his poetry and the young Shelley experimented with electricity. Willliam’s influences go back even further, to the era of the Renaissance, another epoch that saw science and art going hand in hand. Indeed, it was expected that academic artists would be well versed in the so-called Liberal Arts, including mathematics. This was the period that saw Durer writing a treatise on geometry and Leonardo da Vinci inventing flying machines. An animated graphic of these machines is nowadays offered as a screen saver on modern computers, showing how the past and present can interact. Williams is also happy working with computers, insisting that he lives in the 21st century and new technology is as much a part of his practice as the nuts and bolts of the industrial age.

In his Analysis of Beauty (1753) the artist William Hogarth claimed as beautiful that which was fit for its purpose and the truth of this statement is clearly visible in the work on show in Derby, indeed in all Williams’ work. 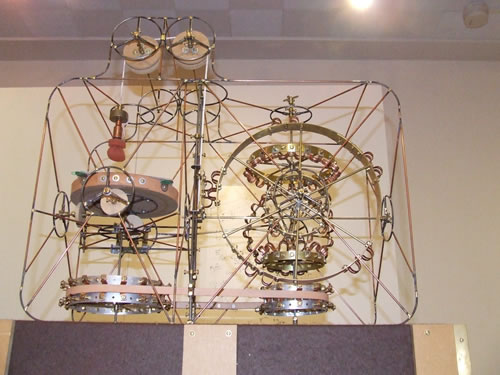 The centrepiece of the show, the two drawing machines, lead us into the dimension of time – the time it takes for the works to move through their cycle, and the way they link with times past. These machines also have a strong sense of the aesthetic, created by the ways in which their moving parts satisfy visually. They are deceptively simple and appropriate for their task. Cartoon Time has a clear link to the Renaissance and before. When artists produced frescos on walls for churches and public buildings, they would produce outline drawings of their designs to scale. These were known as cartoons. The lines had tiny holes punched in them, and charcoal dust was puffed through them onto the wet, prepared wall. William’s machine has a little muslin bag that performs the same function while his machine cranks slowly round. On the other hand Drawing Engine is designed to use any available mark- making device – it could be a Biro or a pencil – to make its random drawings. The configuration of cranks and pulleys and their resulting movement ensures no two works are alike – creating the paradox of art that is made by machine yet retains its individuality! Indeed the paradox continues – this is a device with its roots in the Victorian age, holding a 20th C Bic pen, its name evoking the Search Engines of the Internet. 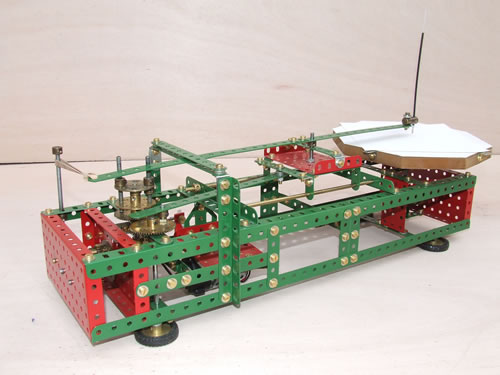 These works are quirky, funny and engaging. They incorporate a wide range of media and influences, demonstrating a lively inventive mind at work. What they show above all is that art that is thought provoking can also be playful and enjoyable.”

The text of this post is taken from an introduction to my work at the Q Gallery, written by Dr. J Bland of the Open University.